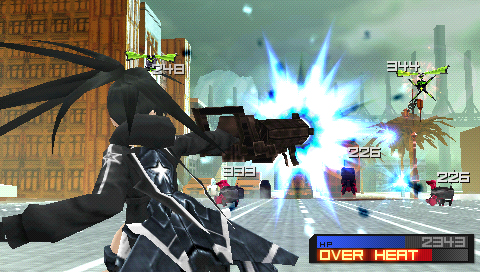 Black Rock Shooter – The Game (Japan) is a popular PlayStation PSP Video Game and now you can play this game on android using PPSSPP android emulator. Black Rock Shooter: The Game (ブラック★ロックシューター THE GAME Burakku Rokku Shūtā Za Gēmu) is an action role-playing game developed by Imageepoch for the PlayStation Portable. It is based on the Black Rock Shooter franchise created by Huke. The game was released in Japan on August 25, 2011. NIS America published the game digitally on the PlayStation Store in North America (United States only) and Europe on April 23 and April 24, 2013, respectively.

Gameplay
Black Rock Shooter: The Game is an action RPG in which players take on the role of the eponymous Black Rock Shooter (BRS for short). The game is divided up into several missions in which the player must clear objectives to progress.

On the main overworld, BRS can explore the available areas and look for certain items. Battle begins when the player comes into contact with an enemy on the overworld.

During battle, BRS can aim and shoot with her rock cannon at enemies, block against attacks and sidestep to avoid them completely. If the player fires the rock cannon or uses the sidestep too much in a short time, the system will overheat, leaving the player vulnerable to attack until it cools down.

Throughout the game, players can earn abilities that can be equipped to BRS and used in battle, each with their own cooldown periods. These include offensive attacks such as a powerful blast, a sniper rifle, or support abilities that can increase BRS’ stats such as her attack or defense. Certain sections will also see BRS ride a motorcycle, in which she can attack enemies on either side of her or use weapons to fire in front of enemies.