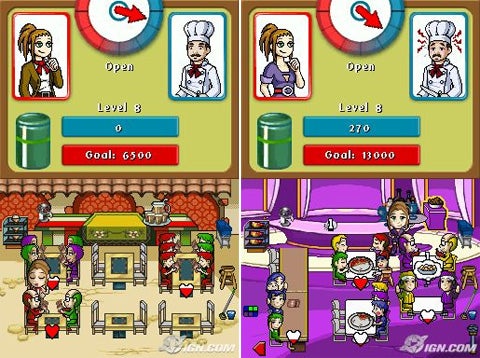 Diner Dash: Sizzle & Serve is a 2007 strategy and time-management video game developed by PlayFirst and published by Eidos Interactive for the Nintendo DS and PlayStation Portable.

It is the first remake of the original Diner Dash of the Diner Dash series with a different art style (redrawn separates) in more or a chibi/cutey manner compared to the original and original unique music among other differences. The game features and plot premise are generally the same as the original game. There’s a plethora of casual games out there on the Interwebs, but only a few of them manage to become viral crazes where everyone’s forking out the cash for the full version. Once they hit that status, though, the videogame publishers take note — a casual hit on the PC can easily convert into the same on the handheld. Just a few months ago Majesco released a handheld version of Cake Mania, and Eidos pounced on a similar game, both in design and in popularity, for both the Nintendo DS and PS. Diner Dash in either handheld form might not be as well-suited on the two systems, but there’s a certain energy and intensity in the gameplay that makes this a tough and challenging, but somewhat addictive arcade-style game.

Gameplay is generally the same as the original game, however, controls were adapted for he PlayStation Portable to be usable with the trigger buttons, d-pad and circular buttons.

The Nintendo DS (which features touch controls in the bottom display and an expanded HUD in the upper display).