Exit is one of the very popular android Game and thousands of people want to get it on their phone or tablets without any payments. Here you can download Exit Game for free. Download the Game from the download link, provided in the page. 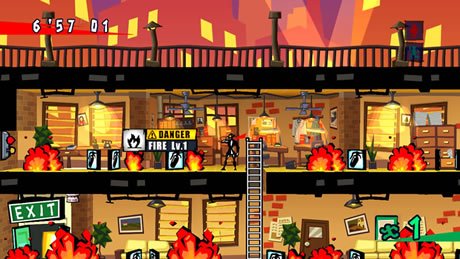 Exit is a popular PlayStation PSP Video Game and now you can play this game on android using PPSSPP android emulator. Exit is a 2005 action/puzzle video game that was developed and published by Taito for the PlayStation Portable. It was first released in Japan, on December 15, 2005, in North America on February 14, 2006, in Australia on March 30, 2006, and in Europe on March 31, 2006. A version for Xbox Live Arcade was released on October 24, 2007. A version for the Nintendo DS was released in 2008 as Exit DS.

Gameplay
Each level includes a starting point for Mr. ESC and an exit point. There may also be one or more trapped individuals within the level, and in many cases, Mr. ESC cannot successfully complete the level unless he rescues some or all of the individuals before he escapes. There is a time limit for completing each level.

Mr. ESC is rather agile, and can swim, run faster, and jump higher, more than any of the other trapped individuals. However, he is still prone to injury from hazards or falls from too high.

The individuals come in four types: